KelseyDangerous Wiki
Register
Don't have an account?
Sign In
Advertisement
in: People, In Control With Kelsey, YouTubers and Twitch streamers

Edit
watch 01:36
We're Getting Mutants in the MCU - The Loop
Do you like this video?
Play Sound

"When you think of me, I hope it turns your plumbobs green."

Kelsey Lauren Impicciche (born July 11, 1991) is an American actress, Twitch Partner, and YouTuber who hosted the BuzzFeed Multiplayer The Sims 4 let's plays, most commonly known for her 100 Baby Challenge LP and collaborations with EA on projects such as the 100 Bae Challenge and EA Game Changers.

This section is in need of citations.

Kelsey Impicciche was born on July 11, 1991 in Indianapolis, Indiana. Her father, Joseph Impicciche, is a lawyer while her mother, Tamsen Impicciche, is a registered nurse. She has one older sister, Andrea, and a older brother named Christopher.

She attended the Visitation Academy, a Catholic school in St. Louis, Missouri from 2003–2010. In 2012, she moved to Los Angeles, California where she went to Loyola Marymount University and graduated with a bachelor's degree in Theatre, before starting her acting career in 2014.

In January 2016, Impicciche began working for BuzzFeed as a video producer and got a Goldendoodle named Chewie. According to her, being a BuzzFeed producer means she is involved in everything from pitching the concept of a video, to pre-production, to filming and editing.

This section needs expansion. You can help by adding to it.

In August 2017, she started hosting a new BuzzFeed show, In Control With Kelsey, a let's play where she assists her friends control their lives in The Sims 4. In January 2018, Impicciche began her career as a Twitch streamer. In October 2018, along with Zach Cieszynski and Ify Nwadiwe, Kelsey announced the rebranding of BuzzFeedBlue to BuzzFeed Multiplayer, in which the channel began featuring more content about gaming, cosplay, and IRL challenges.

This section needs expansion. You can help by adding to it.

After wrapping up the third season of In Control With Kelsey, in December 2018, Impicciche released a video titled, Single Girl Tries the 100 Baby Challenge in The Sims 4, where she tried to make a knock-off version of herself get impregnated 100 times in The Sims while trying to raise 100 children. The video went no. 1 trending on YouTube, as well as the episodes that followed and created a huge demand for fans, who requested for more episodes in a week. On February 5, 2019, Impicciche released an announcement about the show's first spin-off, Remodels Her Children's Home, as well as a statement on Twitter saying she and her team can only do one episode at a time. Since then, from Raises a Teen, show started to become regular on BuzzFeed Multiplayer every Saturday at 11:00 AM EST.

In March 2019, Impicciche received YouTube's The Silver Creator Award for surpassing 100,000 subscribers. In July 2019, she hosted the 2019 VidCon for BuzzFeed. After producing and hosting the hit show for one year straight, she decided to conclude the first season and take a break.

2020: The Sims Spark'd and continuing the baby challenge[]

According to Impicciche in a February 2020 interview by TheGamer about the series, she was anxious at the start because she was never the main character of any BuzzFeed video, as she would usually be with other people. Furthermore, she talked about one of the most surprising things for her about the series:[3]

The fandom. I love fandoms; I'm a very passionate nerd, and I'm a part of a ton of fandoms. It's interesting to me in thinking about fandoms on YouTube, because it's kind of difficult. It was so cool because I accidentally cultivated a fandom. Certain things that I just did out of necessity meant to a lot to people. Like the garden salads - like that didn’t mean anything to me, it was just the cheapest [meal option] that would keep my character healthy. Because in The Sims, characters tend to gain weight, especially when you're getting pregnant that often. And I knew that, so I thought, "I’ll just feed [Chelsea] a garden salad so the food doesn’t [add] to that." And that’s why I did that. And everyone just thought I was weirdly obsessed with them. It was all part of logical thinking, but I didn’t explain it. There’s a lot of things [that fans have latched onto] - like I have yellow chairs in my home. It’s interesting how so many little things that I didn’t even put that much effort or thought into really struck people and made people fall in love with [the series]. It was really gratifying to watch it unfold and see all the inside jokes.

In July 2020, she became a judge in a The Sims reality television show The Sims Spark'd, where players compete in creating stories in The Sims 4 for $100,000. On November 19, 2020, Impicciche won Streamer Raised Charity Funds at The GameHERS awards.

This section needs to be cleaned up to meet quality standards. Please help improve this section if you can.

See also: List of miscellaneous videos on The Sims

Kelsey on her 29th birthday with her dog Chewie 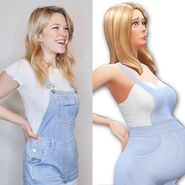 Kelsey ending everyone by cosplaying as Poison Ivy

Kelsey at the 2019 San Diego Comic-Con as Captain Marvel

Community content is available under CC-BY-SA unless otherwise noted.
Advertisement